Gran Canaria Flights FROM or TO Airport Las Palmas

Not only the International Airport Las Palmas in Gran Canaria is situated there, the military TELDE AIR BASE, has its runway directly beside of the civil runway. Both airstrips have an comfortable overall length of more than 3000 meters and will be amplified in the near future. The most used heading for approach to land and take off is heading north against the prevalent northern winds.

The Airport Las Palmas is not directly situated in the city of Las Palmas but rather in the middle of the distance between Las Palmas capital city and the southern Gran Canaria resorts San Agustin, Playa del Inglés, Maspalomas, Puerto Rico and Mogan. To leave the airport you can opt between Bus, Taxi or airport transfer services which need about 20–30 Minutes to Las Palmas city (about. 24 km until Santa Catalina beach Zone) or between 20 and 50 Minutes from airport to the southern resorts (nearest San Agustin, farthest Mogan). The Gran Canaria Airport is situated directly alongside to the expressway GC 1, reason why you can reach the airport always very fast and easy.

where to go for International Arrivals, National departures, Car Hire or Bus transfers. Where to go when arriving at Gran Canaria Airport or where to enter the Las Palmas Airport Terminals for local, national, international and european flights? The Gando…
»»»

about rental-discounts & car-insurance at Gran Canaria Airport Car Rental offers. Especially to visitors, which are planning to discover Gran Canaria with a Rental-Car in more than 3 days, we strongly recommend the car hire at Gran Canaria…
»»»

Las Palmas Airport Shuttle Service by Global Bus No. 60. Travel Transfers by Bus from Las Palmas City to Gran Canaria Airport or vice versa are provided from "Guaguas Global" the local interurban bus lines with the…
»»»

Arrival in Gran Canaria and no transfer from the airport to the Las Palmas Hotel is booked? Not any problem, if not incoming at midnight the easiest and of course the cheapest option is the bus transfer to Las Palmas or Maspalomas. Check the Gran Canaria bus timetable with arrivals and departures at the upper bus stop. Reliable Holiday transfers to the city of Las Palmas or to your southern beach resort in Playa del Ingles, Maspalomas, Puerto Rico or any other location can be booked directly here without extra fee. Of course you’ll arrive also at your destination by taking a taxi or renting a car right from arrival hall at one of nearly 10 rental car services at the airport Las Palmas.

The Las Palmas Airport of Gran Canaria receives about 10 millions of passengers per year. More than 115.000 flights per year are connecting Gran Canaria with the world.

Most european flight connections to and from Gran Canaria are maintained with UK, Germany and Scandinavia. National flights are heading mostly to Madrid (Barajas) and Barcelona, but also there are weekly direct connections to Malaga, Sevilla, Santiago de Compostela and some other spanish cities.

Finally there are existing some attractive non-stop flights from Las Palmas to Morocco, Western-Sahara and to Mauretania. Also Madeira, Cabo Verde Islands and Dakar are connected with weekly flights. 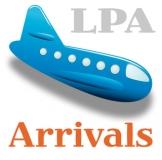 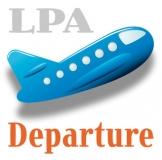 comfortable & efficient private transfers: Nonstop from airport to your Gran Canaria holiday resort: Our popular Las Palmas-24 airport transfer service awaits you personally and drives you nonstop per Limousine, higher class Mercedes Benz Taxis or van / microbus to your final destination. Warranted flat rates, cheaper & better than regular Taxis from the line up! No taximeter-tricks, no ripp-offs, no detour, no surprising supplements! Book easy, pay only directly to the driver !!!

Estimated flight times from and to Gran Canaria Airport

You need actual or real-time arrivals or current departure dates for flights from from to Las Palmas Airport? Arrival and departure Boards for the Gran Canaria Airport in real-time can be seen here: